VIJAYAWADA: Government junior doctors on Saturday launched a protest strike demanding the state government to release their stipend that has been pending for the last few months.

Junior doctors said that first year students were not getting their monthly stipend of Rs 44,500 for the last five months while second year students, who get Rs 46,500, and third year students getting Rs 48,500, were not paid in the last three months. 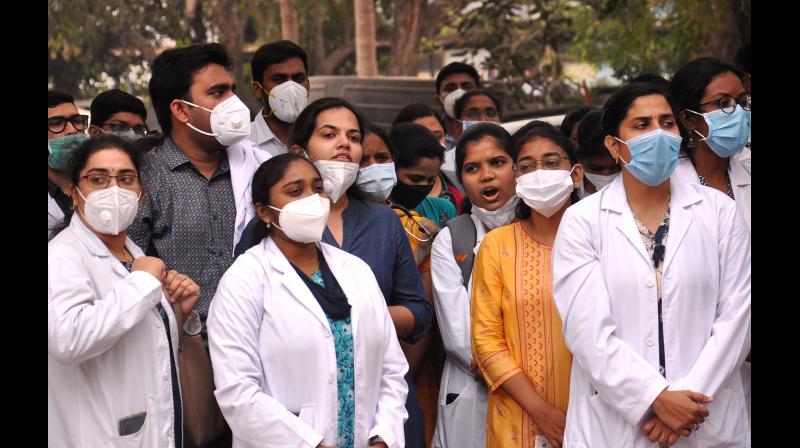 They maintained that they have served a strike notice and would only attend emergency cases. They skipped duty at out-patient wards and did not go on rounds in wards.

Meanwhile, post-graduation students and house surgeons from several private medical colleges complain that though they are supposed to get paid monthly stipend on par with those from government medical colleges, their management was paying less. They alleged that some private managements’ remit full stipend into their bank accounts for records and ask them to return part of the amount.

Regretting the extension of two months to complete their internship and get relieved by the Medical Council, many house surgeons alleged that private managements were threatening them if they don’t serve their respective college for the extended period of internship.

Parents committee president and State BC employees president Dr Ala Venkateswaralu in a statement alleged that Katuri Medical College and hospital located in Guntur was paying stipend to PG students and house surgeons that was significantly less than what has been prescribed by the state government.

Not only were they resorting to financial irregularities, many managements were  threatening not to relieve house surgeons and withhold certificates unless they complete the extended two months of internship. Originally, it is slated to end by March 23. He turned critical against the college management for not releasing Covid-19 incentive to junior doctors even as the state government had released funds to the college for providing medical care to Covid-19 patients.

He said “We appeal to the NTR University of Health Sciences and AP Higher Education Regulatory and Monitoring Commission to inquire and take necessary action.”

NTR University of Health Sciences registrar Dr K. Sankar said “If there are any irregularities with regard to payment of stipend in private medical colleges, we will call for remarks from them and take necessary action once we get any complaint. Moreover, the medical colleges’ principals are having the discretion to extend the period of internship for house surgeons. In case some house surgeons failed to get exposure to non-Covid subjects, they have to take the extended two months period to complete their internship.”